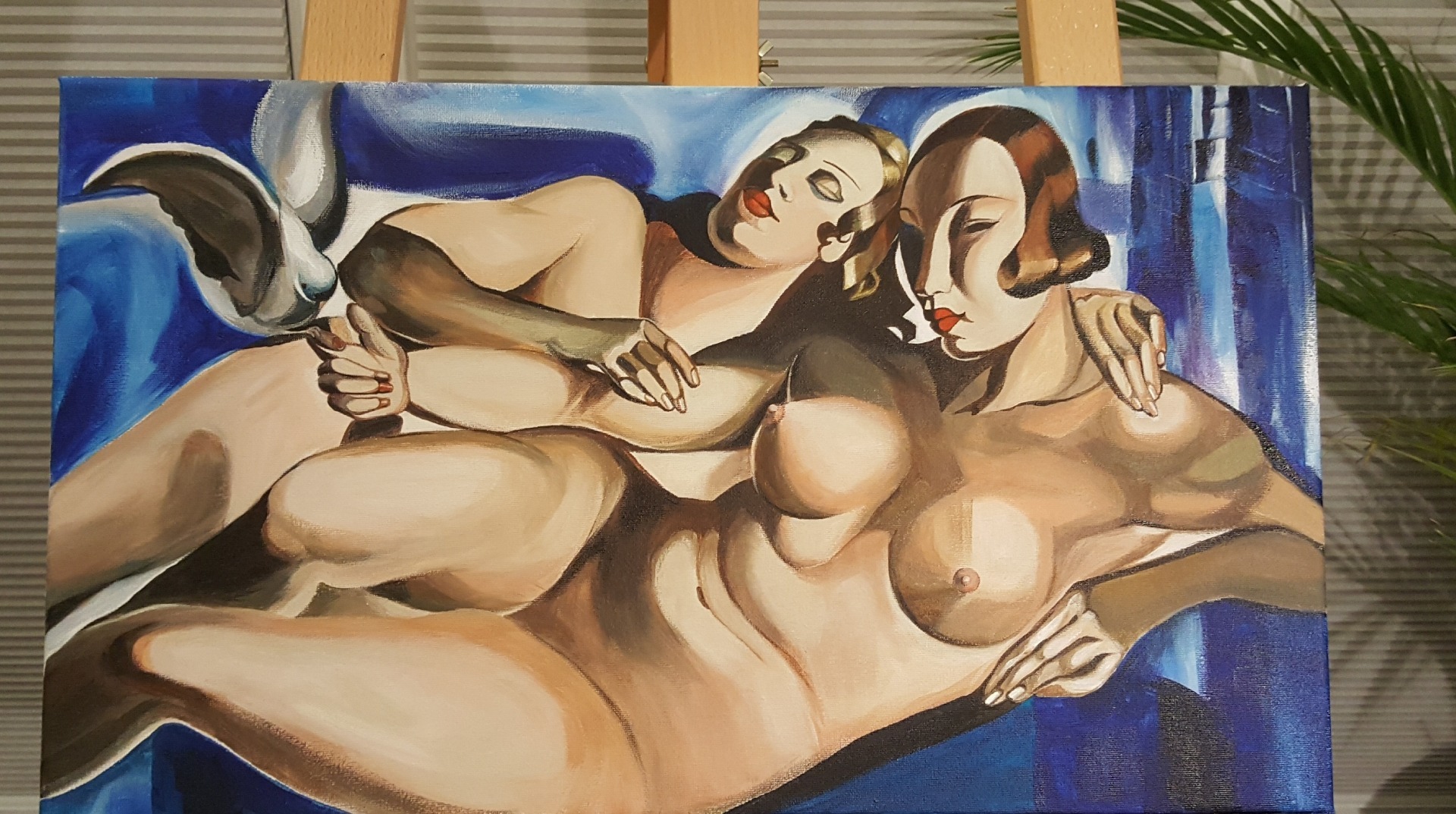 Posted on 24th September 2020
Not too long ago I was asked to create a copy of a painting called ‘Myrto’ by Tamara De Lempicka.
The further I progressed with this copy the more I fell in love with this painting, its fascinating history and the story of the exceptionally talented artist that painted it. The copy I was working on was in fact based on another copy, nobody knows the true destiny of the original. The painting was exhibited for the first time at the Paris Salon d’Automne in 1929, where it was bought by Dr. Pierre Boucard for his private collection. In 1940 the villa where Dr. Boucard kept the painting was requisitioned and became the residence of the high-ranking SS officers.
From that day all traces of ‘Myrto’ were lost. There are in fact two main theories regarding the disappearance of this painting. One is that Dr. Boucard himself in order to save the painting moved it to his yacht in the South of France. The other is that ‘Myrto’ was stolen by one of the German officers, this later theory is more likely and even Tamara De Lempicka confirmed this herself by scribbling at the back of a photograph ‘Stolen by the Nazis’.
Tamara De Lempicka of course painted many beautiful paintings but because I had an opportunity to create a copy of ‘Myrto’, this painting will always be for me one of my favourites. Tamara De Lempicka was famous not only for her amazing art but also for her extravagant personality, beauty, style and fascinating life story. As I read about this artist I decided to pick out a couple of what I thought were interesting facts and the quotes by the artist.
There is some confusion over when and where Tamara De Lempicka was born. She told some that she was born in Moscow in 1907 however most historians these days agree that she was born in 1898 in Warsaw, Poland.
She began her career when she was a young teenager. When she was about 12 a famous painter painted her portrait, however she hated the result and thought that she could do a better job. This inspired her to create her first painting, a portrait of her younger sister Adrienne.
After her parents divorced she spent one summer in St Petersburg with her aunt, there she met and fell in love with a successful Polish lawyer Tadeusz Lempicki. She was still a teenager when they married in 1916. The life of luxury that they had was ended by the Russian Revolution in 1917. Tadeusz Lempicki was arrested by the Bolshevicks but Tamara managed to secure his release. They fled to Paris.
Like many other exiled White Russians when they arrived in Paris they had no money as they were forced to abandon all of their possessions. Tadeusz was unable to find work and the family lived for a while from the sale of family jewels. In 1919 Tamara’s only daughter Kizette was born adding to the financial pressures. Tamara decided to become a painter.
Tamra de Lempicka time was the 1920, her art the embodiment of Art Deco style. Her probably most famous painting ‘Tamara in Green Bugatti’ was commissioned for the cover of German magazine Die Dame which saw the artist as a ‘symbol of women’s liberation’. She combined traditional style with advertising techniques, elaborate photographic lighting and architectural views of great cities.
Some of my favourite Tamara De Lempicka’s quotes include this one, referring to her iconic Green Bugatti which in fact was a yellow Renault…
’There are no miracles. There is only what you make’.
Here are some other things she said…
‘To play Chopin was not so important, in comparison to being Chopin’
‘I fell in love with him because he was so good-looking. And because he was all alone with ten women around him’ referring to her falling in love with Tadeusz Lempicki.
Tamara’s wedding dress stretched the entire length of the chapel. ‘That’s the way everyone’s wedding gown should look. You only get this one chance in your life to have everyone turn to stare at you, no matter whether you’re beautiful or not’.
Speaking of her art in comparison to her contemporaries she would say ‘Everything that I did was never done like the others were doing…Somehow I did always differently…I wanted to do what I want.’
‘There is very little background in my paintings. I want you to see the figure, that is what is important’.
She sometimes deliberately made the tops of some portraits appear missing. ‘People thought I had made a mistake, I had chopped off a piece of their heads. But I wanted it to look like the people ran in and out, leading their busy lives’.
Tamara was obsessively neat, in art as well as her home. Referring to the standards of setting the table she said
‘I am very precise. The table has to be …perfect. Otherwise it disturbs me. I have precision in everything, the same in my paintings. My paintings are finished from this little corner to this little corner.’
‘I do what I want to do and hate to do what I have to do….My life was never conventional…I’m not the ‘classic’ type of person.’
‘My goal is never to copy’ but to ‘create a new style’…
This content will only be shown when viewing the full post. Click on this text to edit it.
Share this post: